The list of alarming actions and statements from President Trump’s first week in office takes our collective breath away. New York Times columnist David Brooks describes the week as being all about threat perception: building a wall against a Mexican/Central American threat; restoring torture chambers to fight the terrorist threat; erecting immigration barriers against a Muslim threat. That is precisely the kind of fear that has defined some of the most shameful chapters in our nation’s history. It legitimizes intolerance and the dehumanization of others that leads to violence. Leading from such a posture of fear endangers all of us, and it is antithetical to Jesus’ gospel of love.

All Christian Americans should be offended that President Trump has decided that some of the most vulnerable refugees on the planet are not welcome here because they are of the Muslim faith, but that Christians from the seven troubled countries that the President has named are to receive favored treatment. Such favoritism is an insult to Christians. I stand proudly with other Christians and interfaith leaders to protest this order, express solidarity with one another, and together call our nation to the highest of our common spiritual and civic values.

Scripture could not be clearer: we are called to welcome the stranger. Jesus himself was a refugee when his parents fled their homeland to save his life from a brutal ruler. He taught without compromise that what we do to the least of our brothers and sisters, we do to him. The hero of of Jesus’ most famous parable on the love of neighbor belonged to a despised people.

At times such as these we often ask ourselves what we as individuals can do to make a difference. In this case, the answer is: much. A tremendous nationwide mobilization to protest the president’s action is now underway, and the Episcopal Church is playing its part. I commend to you a new advocacy initiative from the Episcopal Public Policy Network (EPPN), which is part of our church’s Office of Government Relations. If you join me in the 2×4 Fight for Refugees Campaign, you will commit to calling your national, state, and local elected officials four times during the next two months on behalf of refugees. You can learn more about the campaign and find a helpful script online. And, if you are of a mind, you can join the network to receive updates and alerts.

The opposite of love is not hate, but fear. Jesus’ gospel is of only love, and Scripture assures us that perfect love casts out fear. We need not respond in hate to anyone, for Jesus meets us in the places where we are afraid with his love, courage and strength. May we draw upon that love now and stand firm in the days ahead. 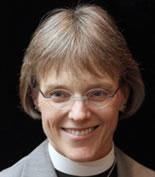 Prior to this, Budde served for 18 years as rector of St. John’s, Minneapolis, guiding that congregation through significant membership and financial growth, two capital campaigns, and comprehensive ministry development.

Since 2001, Budde has served as a Conference Leader for CREDO, an organization committed to clergy wellness and vocational renewal. Ministry with clergy colleagues is one of her greatest strengths and joys.